We arrived to Iceland early in the morning. First thing we did was check in at the Gray Line tour counter for our transfer to Reykjavik with a stopover at The Blue Lagoon.This was the best thing, because it definitely woke us up after the long flight from Boston on WOW Airlines.

When we arrived at the Blue Lagoon, we first had to unload our luggage at the storage facility in a separate building. Make sure you get all your extra clothing, shampoo and slippers out and bring them with you, because you won’t be able to go back to your luggage until you’re ready to leave. Once inside the main building, we were all given bracelets that you charge everything on and the men and women were separated to go to the locker rooms/ changing rooms. Here you will have to shower before going into the lagoon, in front of everyone. There are enclosed showers, but there still isn’t much privacy and you will be waiting a long time in line for those.

Once, you’ve showered you can head out to the lagoon. There is an indoor pool that leads to the outdoor lagoon. If you want, you can enter from here . It would be the option if it is cold outside. There is also a cafe in this section too.

Once you’re outside you can see how blue the water is, and if it’s really cold you’ll just wanna run right into the water because it really is warm! There is a swim up bar inside the lagoon that you can purchase a waterproof case for your phone and drinks.

We spent a couple of hours here and played around with the silica mud masks that are available for free at stations around the lagoon. When you are ready to leave you can purchase similar products at the gift shop there.

We checked in to OK Hotel on the main street Laugavegur, which is actually a service apartment complex. There is no reception, so be sure to check your emails on how to check in. We just picked up the phone and the person that answered told us how to get in. It actually was very easy. The location of the rooms are behind the restaurant.

By the time we were all settled in to our room, it was the afternoon and the sun was already going down! We decided to walk down the street and find a place to eat. We found a Subway and decided to eat there. I know, it’s not adventurous, but it was affordable. We passed a few restaurants and the prices kind of scared of us! Later, we ended up in a cafe. The Sandholt Reykjavik and had some delicious deserts and something warm to drink.

Afterwards, we stopped at the grocery store thats right across the street from where we were staying and bought our food because we had a kitchen. This definitely helped us save some money.

The next day, we woke up early and made our own breakfast and headed into town. It was cold, but we made a trek to Hallgrimskirkja, the biggest church in the city, you can’t miss it. The architecture is unique and there is a great view of the city from the top of the church.

Back down in town we decided to visit Harpa, another architectural beauty that is covered in colored glass inspired by the basalt columns you can find in the country. To me I thought it looked more like a honey comb.

We didn’t watch a show, but you can enter the building for free. There is a cafe and a gift shop inside.

Right next door to Harpa is a small marina where you can find restaurants that serve fresh seafood and stands to book any boating tours.

The next day we woke up early for a 2 day chasing ice excursion with Goecco Tours. We all met in front of Hallgrimskirkja and loaded a small luggage for my husband and I. We visited a cave, a couple of waterfalls, and then ended the day at Reynisfjara.

The first stop they took us too was a lava tube cave. They said the Batman Begins movie was filmed here.

The sun had gone down fast and we probably only had 5 hours of sun. We stopped at the cafe at the beach and then quickly got on our bus to go to our guesthouse.

Once at the guest house everyone as a group got to know each other. We cooked an Icelandic meal with salmon, sheep head, and something else….i can’t remember. It was a  good meal. the couples were able to have their own private rooms and the singles shared rooms with bunk beds like a hostel and everyone shared 2 bathrooms.

The next morning, we woke up early and were split into two groups. The first group went to visit the ice cave. The second group went to Jokulsarlon glacier lagoon. We were in the second group, and I’m glad we were. We had more time to explore the lagoon and the beach. The different shades of blue and crystal clear ice formations were beautiful.

I could’ve stayed at Jokulsarlon for a good while. I was in awe of the beauty. But soon the other group came and we were off to see the ice cave.

We went to Skaftafell National Park to find the cave in Vatnajokull glacier. We went off roading through small rivers and rocky paths until we finally arrived to the tongue of the glacier. Once there, we were outfitted with helmets, headlights, and crampons. We were instructed to stay with the group and not to venture off the small path that lead inside.

The blue color of the ice inside was incredible. Once, we all had finished taking our pictures we met back up with the other group and ventured to 2 other glaciers to view.

And that was it. Our tour ended and we headed back to Reykjavik on our bus. We were lucky to catch a glimpse of the Northern lights on the way back, but the lights were very subtle in the distance.

The  next day we rented our own vehicle and headed to the Golden Circle. The vehicle we rented came equipped with a GPS and had studded tires to help with icy roads.

Later that night we checked the aurora forecast to see where we can find clear skies to see the Northern Lights. We headed south and drove until midnight. We were lucky to find a few spots. The lights started off as a glimmer but then they just start to appear and then they start to “dance”. Yes it was AMAZING to see.

Our visit to Iceland wasn’t long enough. I hope to visit again and explore the other parts of this beautiful island. 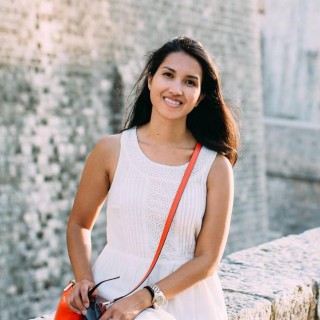